In May 2016, the U.S. Departments of Justice and Education released historic guidance for the nation’s schools on the needs and rights of hundreds of thousands of students who are transgender. The guidance summarized over a decade of case law and best practices from across the country, advising schools that under the federal Title IX law, schools should treat trans students according to their gender identity.

The guidance was widely hailed by education and child health experts. But just days after Attorney General Jeff Sessions and Education Secretary Betsy DeVos were confirmed, the Trump administration announced they would be rolling back the guidance. Parents, students, teachers, and others across the country are rightfully concerned about what this means for them or their trans loved ones. Here’s what you need to know. 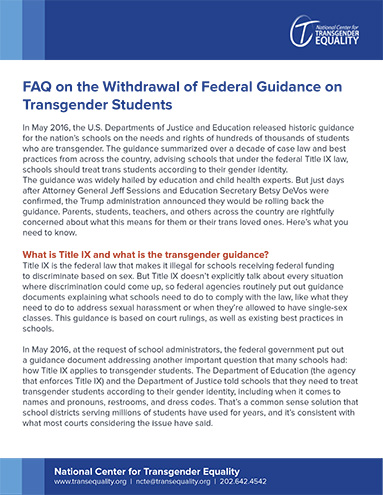 What is Title IX and what is the transgender guidance?

Title IX is the federal law that makes it illegal for schools receiving federal funding to discriminate based on sex. But Title IX doesn’t explicitly talk about every situation where discrimination could come up, so federal agencies routinely put out guidance documents explaining what schools need to do to comply with the law, like what they need to do to address sexual harassment or when they’re allowed to have single-sex classes. This guidance is based on court rulings, as well as existing best practices in schools.

In May 2016, at the request of school administrators, the federal government put out a guidance document addressing another important question that many schools had: how Title IX applies to transgender students. The Department of Education (the agency that enforces Title IX) and the Department of Justice told schools that they need to treat transgender students according to their gender identity, including when it comes to names and pronouns, restrooms, and dress codes. That’s a common sense solution that school districts serving millions of students have used for years, and it’s consistent with what most courts considering the issue have said.

What happens now that the Title IX guidance is rolled back?

But taking the guidance away will likely make school harder for many students. The guidance gave students and their parents a powerful tool to advocate to themselves, and it gave schools much-needed practical information about implementing good policies. Taking away the guidance could lead schools to be confused about what their responsibilities are under federal law, and it might make changing policies at unsupportive school districts an uphill battle for many students. And unfortunately, the harmful message sent by the Trump administration’s rollback of the guidance could encourage some students, staff, and administrators to bully and discriminate against transgender students.

How does rolling back the guidance affect Gavin Grimm’s case in the Supreme Court?

Gavin Grimm is a young transgender man whose school has forced him to use a separate restroom from any of his peers for over two years. His case is now going to the Supreme Court, which will hear oral arguments on March 28 and make a decision by late June. Even though the guidance has been rolled back, Gavin—and transgender students nationwide—can still win in court.

When the Supreme Court agreed to take the case, it decided to review two questions. The first was a procedural question about whether courts should defer to the Department of Education’s interpretation of Title IX, and it’s possible the justices might think that question isn’t relevant anymore if the federal government is changing their interpretation of that law. But the second question is about the meaning of Title IX itself—specifically, whether Title IX protects transgender students from discrimination. Most lower courts have said that it does, and the Supreme Court will likely still hear the case and answer that question no matter what the Trump administration does.

Now that the guidance has been rolled back, does that mean that schools can’t protect transgender students?

No. Schools that are already supporting transgender students can and should continue to do so. While the Supreme Court is considering whether one federal law, Title IX, protects transgender students, there are also constitutional protections and many state and local laws that prohibit discrimination. Just as important, schools have an obligation to protect the welfare of all students, including trans students. When transgender students can’t do something as basic as using the restroom at school without being singled out and humiliated, that puts their health and wellbeing at risk.

Why are policies that support transgender students important?

Transgender students live in every part of the United States, including an estimated 150,000 between 13-17 years of age. Research shows that transgender children and adolescents thrive when they are supported and treated equally, but persistent discrimination against these students is profoundly harmful. For example, forcing a transgender student to use a separate restroom from all of their peers sends a message to that student and all the student’s peers that there is something wrong with them and that they are not entitled to the same dignity as other students. Transgender students already experience high rates of bullying by peers and adults, and the stress of harassment and discrimination can lead to lower attendance and grades as well as depression, anxiety, and suicidality.

What do education and child health experts think about this issue?

What resources exist for schools that want to support all students, including transgender students?

NCTE’s Centro de acción escolar includes many resources for transgender students, their parents, and their allies, as well as school officials.

What can students facing discrimination do now?

If you or someone close to you has experienced bullying or discrimination, you can start by bringing your concerns to school and district officials. Contact your school district, find out about its nondiscrimination and anti-bullying policies, and see if you can work together to resolve the issue. Many school officials are willing to do the right thing once they have the information they need.

If you need help, you can contact an LGBT legal group. They might be able to help you resolve the situation or, if necessary, file a lawsuit. You can find a list of LGBT legal groups aquí.