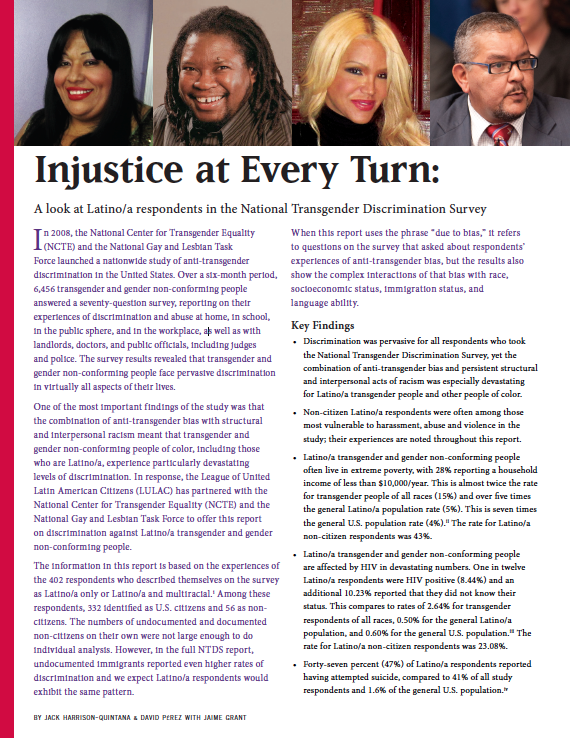 In 2008, the National Center for Transgender Equality (NCTE) and the National LGBTQ Task Force launched a nationwide study of anti-transgender discrimination in the United States. Over a six-month period, 6,456 transgender and gender non-conforming people answered a seventy-question survey, reporting on their experiences of discrimination and abuse at home, in school, in the public sphere, and in the workplace, as well as with landlords, doctors, and public officials, including judges and police. The survey results revealed that transgender and gender non-conforming people face pervasive discrimination in virtually all aspects of their lives.

One of the most important findings of the study was that the combination of anti-transgender bias with structural and interpersonal racism meant that transgender and gender non-conforming people of color, including those who are Latino/a, experience particularly devastating levels of discrimination. In response, the League of United Latin American Citizens (LULAC) has partnered with the National Center for Transgender Equality (NCTE) and the National LGBTQ Task Force to offer this report on discrimination against Latino/a transgender and gender non-conforming people.

The information in this report is based on the experiences of the 402 respondents who described themselves on the survey as Latino/a only or Latino/a and multiracial. Among these respondents, 332 identified as U.S. citizens and 56 as noncitizens. The numbers of undocumented and documented non-citizens on their own were not large enough to do individual analysis. However, in the full NTDS report, undocumented immigrants reported even higher rates of discrimination and we expect Latino/a respondents would exhibit the same pattern.