Download: Our Moment for Reform for Transgender People and Immigration (English)

Download: Our Moment for Reform for Transgender People and Immigration (Spanish) 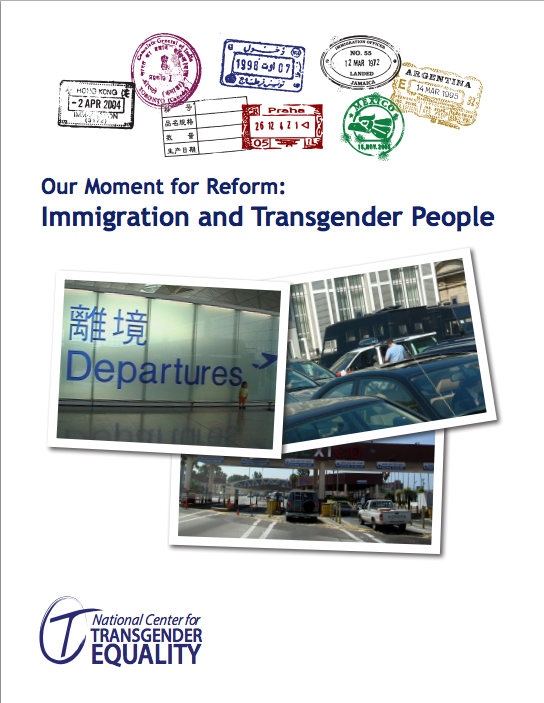 Shortcomings and inequities in current US immigration law impact tens of thousands of transgender people and family members. According to the Williams Institute at UCLA, there are approximately 267,000 lesbian, gay, bisexual, and transgender (LGBT) adult undocumented immigrants living in the United States.1 We estimate that between 15,000 and 50,000 of these undocumented adults are transgender, based on existing data on the trans population as a fraction of the US population and LGBT population.2 The actual number may be higher because many people may be reluctant to identify themselves as transgender. However, the full impact of immigration laws on trans people and their families is far larger, and includes:

Many transgender immigrants came to the US to escape severe and often life-threatening persecution because of who they are. Others came fleeing desperate poverty, compounded by gender-based discrimination. Still others arrived at a young age with family members and have grown up in the United States. Transgender immigrants work hard to support themselves and their families, and make the best of the circumstances created by a broken immigration system and lingering prejudices against trans people. Yet among a transgender population that is already marginalized, the National Transgender Discrimination Survey shows that undocumented transgender people face even higher risks of discrimination and violence in employment, housing, health care, when seeking services, and even in their own home.

Trans immigrants often have limited support systems, and find themselves shut out of jobs or education that could provide them with better opportunities. They are commonly denied the right to seek asylum or to be sponsored for lawful permanent residence by a partner. When placed in immigration detention, they frequently face inhumane and dangerous conditions. Given these factors, any vision of comprehensive immigration reform must include ensuring security and safety for trans immigrants.

This report builds off of the Center for American Progress’s Living in Dual Shadows report, which presented the issues affecting LGBT undocumented people in the United States. Our goal is to highlight the concerns of transgender immigrants as an especially vulnerable group within the immigration system. We hope this report will aid advocacy organizations and policy makers alike to include a consideration of trans immigrants’ rights in their work toward Comprehensive Immigration Reform.

2 The low estimate of 15,000 is based on estimates that 0.3% of the U.S. adult population is transgender, or about 700,000 adults. Gary J. Gates (2011), “How many people are lesbian, gay, bisexual, or transgender?” Los Angeles, CA: Williams Institute. We multiplied the 700,000 estimate by the 2% of respondents in the National Transgender Discrimination survey who identified themselves as undocumented. Grant, Jaime M., Lisa A. Mottet, Justin Tanis, Jack Harrison, Jody L. Herman, and Mara Keisling. Injustice at Every Turn: A Report of the National Transgender Discrimination Survey. Washington: National Center for Transgender Equality and National Gay and Lesbian Task Force 53 (2011) [hereinafter Nat’l Trans Discrimination Survey].The high estimate of 50,000 is based on applying that 0.3% estimate to the estimate 11,000,000 people in the U.S. who are undocumented. Michael Hoefer, Nancy Rytina, and Bryan Baker (2012), “Estimates of the Unauthorized Immigrant Population Residing in the United States: January 2011.” Washington, DC: Department of Homeland Security.

3 This estimate is based on the finding that 50% of transgender adults report having a spouse or partner. Nat’l Trans Discrimination Survey.

4 This estimate is based on the finding that 38% of transgender adults report being parents. Nat’l Trans Discrimination Survey.

5 No estimates exist for this population of young transgender immigrants.