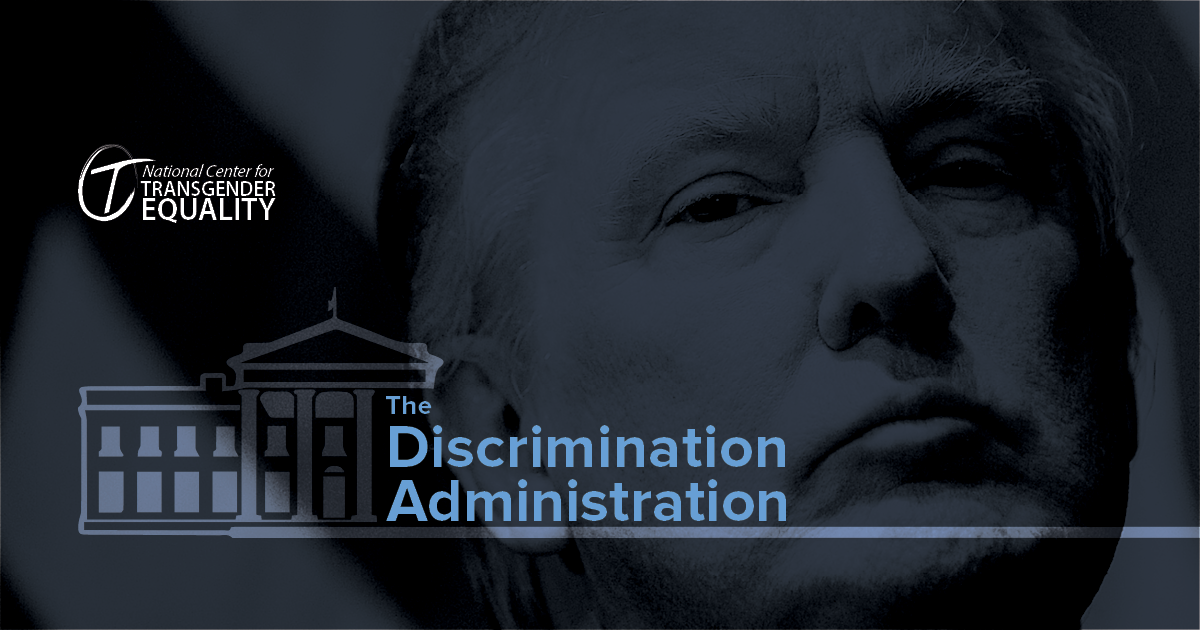 23 julio de 2020: The Department of Housing and Urban Development formally announced the rollback of a previous rule that protected transgender people from discrimination by homeless shelters and other housing services receiving federal funds.

19 de junio de 2020: The Department of Health and Human Services announced that it finalized the extensive rollback of health care discrimination rules, to eliminate the protections for transgender people experiencing discrimination in health care settings and/or by insurance companies denying transition-related care, as well as to weaken nondiscriminatory access to health care for those with Limited English Proficiency.

May 15, 2020: The Department of Education emitió una carta declaring that the federal Title IX rule requires school to ban transgender students from participating in school sports, and threatening to withhold funding from Connecticut schools if they do not comply.

Mayo 6, 2020: El departamento de educación published a final rule encouraging schools to dramatically weaken protections for student survivors of sexual violence and harassment, and eliminating a provision that encouraged religiously-affiliated schools to notify the Department and the public of their intent to discriminate on the basis of sex under a Title IX waiver.

Marzo 26, 2020: El departamento de justicia filed a court brief in the District of Connecticut in opposition to a Connecticut Interscholastic Athletic Conference policy that allows transgender athletes to play sports with their peers.

Febrero 27, 2020: El departamento de justicia filed another court brief, this time in the Western District of Kentucky, expressing the view of the United States that anti-LGBTQ discrimination is not "a sufficient government interest" to overcome the objections of private businesses who want to deny "expressive" services such as photography services to LGBTQ people, and that these businesses must be permitted to opt out of complying with local nondiscrimination laws.

Enero 16, 2020: Nine federal agencies - Departments of Agriculture, Education, Health and Human Services, Homeland Security, Housing and Urban Development, Justice, Labor, and Veterans Affairs, and the U.S. Agency on International Development - all cambios de reglas propuestos that would eliminate the rights of people receiving help from federal programs to request a referral if they have a concern or problem with a faith-based provider and to receive written notice of their rights; and that would encourage agencies to claim religious exemptions to deny help to certain people while receiving federal funds.

5 de noviembre.: The Department of Labor propuesto to exempt the TRICARE health care program for military dependents and retirees from requirements not to discriminate on the basis of sexual orientation or gender identity. It is not immediately apparent whether TRICARE intends to make any changes in its benefits policies. Currently, TRICARE covers hormone therapy and counseling for transgender retirees and dependents, but DOD interprets the TRICARE statute to exclude transition-related surgery regardless of medical necessity.=

Noviembre 1, 2019: El Departamento de Salud y Servicios Humanos. anunció it would not enforce, and planned to repeal, regulations prohibiting discrimination based on gender identity, sexual orientation, and religion in all HHS grant programs. These include programs to address the HIV, opioid, and youth homelessness epidemics, as well as hundreds of billions of dollars in other health and human service programs.

19 de septiembre 2019: Los Department of Health and Human Services cancelled a plan to explicitly prohibit hospitals from discriminating against LGBTQ patients as a requirement of Medicare and Medicaid funds.

16 de agosto de 2019: The Department of Justice filed a brief in the U.S. Supreme Court  arguing that federal law “does not prohibit discrimination against transgender persons based on their transgender status.”

14 de agosto de 2019: The Department of Labor announced a proposed rule that would radically expand the ability of federal contractors to exempt themselves from equal employment opportunity requirements, allowing for-profit and non-profit employers to impose “religious criteria” on employees that could include barring LGBTQ employees.

15 julio de 2019: The Departments of Justice and Homeland Security announced an interim final rule that would block the vast majority of asylum-seekers from entering the United States, with deadly consequences for those fleeing anti-LGBTQ violence.

8 julio de 2019: The Department of State established a “Commission on Unalienable Rights” aimed at narrowing our country’s human rights advocacy to fit with the “natural law” and “natural rights” views of social conservatives, stating it would seek to “be vigilant that human rights discourse not be corrupted or hijacked or used for dubious or malignant purposes.” (Shortly thereafter, the State Department official tasked with coordinating the new commission was fired for “abusive” management including homophobic remarks.)

3 julio de 2019: The Department of Housing and Urban Development removed requirements that applicants for homelessness funding maintain anti-discrimination policies and demonstrate efforts to serve LGBT people and their families, who are more likely to be homeless.

May 24, 2019: The Department of Health and Human Services published a proposed rule that would remove all recognition that federal law prohibits transgender patients from discrimination in health care. Courts across the nation have ruled otherwise.

May 14, 2019: President Trump announced his opposition to the Equality Act (H.R. 5), the federal legislation that would confirm and strengthen civil rights protections for LGBTQ Americans and others.

May 2, 2019: The Department of Health and Human Services published a final rule encouraging hospital officials, staff, and insurance companies to deny care to patients, including transgender patients, based on religious or moral beliefs. This vague and broad rule was immediately challenged in court.

19 de abril de 2019: The Department of Health and Human Service announced a proposed rule to abandon data collection on sexual orientation of foster youth and foster and adoptive parents and guardians.

Marzo 13, 2019: El Departamento de Defensa laid out its plans for implementing its ban on transgender troops, giving an official implementation date of April 12.

19 de noviembre.: The Department of State appealed a court order directing it to issue a passport with a gender-neutral designation to a non-binary, intersex applicant.

October 24, 2018: The Department of Justice submitted a brief to the Supreme Court aruging that it is legal to discriminate against transgender employee, contradicting court rulings that say protections under Title VII in the workplace don’t extend to transgender workers.

October 21, 2018: The New York Times reported that the Department of Health and Human Services proposed in a memo to change the legal definition of sex under Title IX, which would would leave transgender people vulnerable to discrimination.

11 de abril de 2018: The Department of Justice proposed to strip data collection on sexual orientation and gender identity of teens from the National Crime Victimization Survey.

Marzo 20, 2018: The Department of Education reiterated that the Trump administration would refuse to allow transgender students to use bathrooms and locker rooms based on their gender identity, countering multiple court rulings reaffirming that transgender students are protected under Title IX.

Marzo 5, 2018: The Department Housing and Urban Development Secretary announced a change to its official mission statement by removing its commitment of inclusive and discrimination-free communities from the statement.

Enero: The Department of Health and Human Services proposed a rule that encourages medical providers to use religious grounds to deny treatment to transgender people, people who need reproductive care, and others.

October 2, 2017: President Trump nominated Kyle Duncan to serve as a United States Circuit Judge of the United States Court of Appeals for the Fifth Circuit. Duncan has dedicated his career to limiting the rights of transgender people, and even defended the anti-trans parties in the North Carolina’s infamous HB2 debacle and the school district that discriminated against Gavin Grimm.

13 julio de 2017: President Trump nominated Mark Norris to the United States District Court for the Western District of Tennessee. Norris has worked to make it easier to discriminate against LGBTQ people, and even worked to discriminate specifically against transgender kids.

4 de abril de 2017: The Departments of Justice and Labor cancelled quarterly conference calls with LGBT organizations; on these calls, which had happened for years, government attorneys shared information on employment laws and cases.

Enero: On President Trump’s inauguration day, the adminstration scrubbed all mentions of LGBTQ people from the websites of the White House, Department of State, and Department of Labor.

Ataques crueles e implacables a comunidades de inmigrantes. On September 5, 2017, President Trump acted to strip hundreds of thousands of Americans and their families of security, stability, and safety by ending the Deferred Action for Childhood Arrivals (DACA) program. On April 6, 2018, Attorney General Jeff Sessions announced a “zero tolerance” policy that separated hundreds of immigrant children from their families. On April 10, a federal official announced that the Department of Justice was halting the Legal Orientation Program, which offers legal assistance to immigrants. On June 11, Attorney General Sessions ruled that domestic or gang violence are not grounds for asylum in the United States. These are just a few of many anti-immigrant actions that are especially dangerous for many LGBT immigrants who could face life-threatening violence if deported.